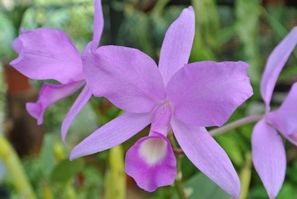 The national flower of Costa Rica is called the purple country girl, or Guaria Morada in Spanish. It is a stunning orchid shining with purple hues and thin, rounded petals. Based on Tico tradition, the flower brings good luck and fortune. It has a long history tied to the land and its inhabitants, and without a doubt, it's our favourite flower!

For hundreds of years, purple country girl flowers have been used to decorate the church's alter during Lent and the holy week leading up to Easter. The native Costa Ricans even used to adorn their heads with the large purple plant. However, the Guaria Morada owes its scientific name, Cattleya skinneri, to James Batemen, an English botanist. Batemen wanted to honor George Ure Skinner, an English trader who spent several years collecting, planting and shipping the different flora of Central America to his homeland. I read a book once that said in the mid 1800's, the purple country girl was so popular in Europe that almost every private botanical collector had one!

In 1937, there was a vote to select the favorites for the national flower of Costa Rican. Horticulturalists, college students and political officials participated in the poll. It wasn't until June 15, 1939, that the purple country girl was officially designated Costa Rica's national flower. In the department of agriculture's building, former Costa Rican President Leon Cortes Castro signed the purple flower forever into the books of national history.

Thirty three years later, president Jose Figueres Ferrer issued a decree setting the second week of March as the "Costa Rican Orchid week" a time when the purple country girl is at its peak.

Traditionally, Ticos would grow the gorgeous plant to put on the inner courtyards, roofs of houses, in gardens and inside the adobe walls. This type of custom was common in older cities, such as Cartago,Santo Domingo de Heredia and Escazu.

Today, the national flower is popular as an ornamental plant inside, used to brighten homes and nurseries. When I peek in my human friends houses, it certainly works wonders. In many respects, this orchid symbolizes the beauty of the Tico spirit. It also represents the fragility and elegance of nature.

IdentificationFascinatingly, these gorgeous plants do not have roots in the soil - if you are planning to go on a hike to see some in the wild, you'll most likely have to look up! Like me, purple country girls prefer the trees: Guaria Morada are a type of epiphyte, which means that they grow upon another plant, such as a tree, for support, while they receive moisture and nutrients from the rain and air.

In spite of its name, I've seen this flower in shades ranging from bluish-purple to a pretty pink hue.

Best Places to Find the FlowerThe purple country girl is quite rare in the wild. If you get lucky, the guaria morada grows along the Pacific Coast and in pre-mountainous areas between 500 to 1,000 meters above sea level. The flower is most abundant in the Central Valley in a range of tropical habitats, from pre-mountain rainforest to wet forests to lower mountain rainforests. The isolated areas of Guanacaste and Nicoya Peninsula and Tilaran ridges, which are located in the foothills of the Pacific coast, contains patches of purple country girl. I love wandering through these locales around midday, when the sun glimmers off the top of the purple, giving the petals a diamond-like shimmer. Guaria Morada and other orchids lovers should also go to Lankester Botanical Gardens in Cartago, they have the biggest orchid collection in Costa Rica.
​
The plant blooms from January through April, sending gorgeous purple petals to shine under the warm Costa Rican sun.
Powered by